Seven sculptures by four artists were installed at Michigan Legacy Art Park for a two year, temporary exhibit. Ranging in style from stark to whimsical and black to colorful, the works are by artists from Michigan or with ties to Michigan. Six of the pieces will be at the entry gallery of Michigan Legacy Art Park and one is on display on the grounds at Crystal Mountain.

Sculptor Joshua Ray Smith installed two graceful and fluid pieces which belie their industrial steel nature. Cloud: Dehydrated Improvisation, and Time Collector for a Michigan Forest are “time collectors,” the latter created specifically for the Art Park. This piece references the lines, branches, layers, or spider webs of a Michigan forest and the flicker of sunlight cast through each.

Smith explains the concept of “time collectors”: “In the rusting of steel, the elements and time of that specific atmosphere are recorded. The rust in its pattern, color, and texture, becomes a record of the weather and time that has passed specific to location.”

Patrons to the Art Park will witness the unique and intended evolution of a sculpture, and how nature contributes to and creates art all its own. Smith received an MFA from Cranbrook Art Academy, taught art at Concordia University in Ann Arbor and lectured at the University of Michigan School of Art and Design. He currently resides in Nebraska and is Assistant Professor of Art at Concordia University Nebraska in Seward.

Tim Burke is proud of repurposing materials found in the abandoned warehouses and factories of Detroit, what he calls, “unclaimed, dismantled, tossed aside gems.” He operates the Detroit Industrial Gallery and has a studio there, where he believes in giving old relics new life.

Burke installed The Parcae near Crystal Mountain’s Wild Tomato restaurant. This whimsical trio of robots is fashioned from fighter jet parts, Patriot missile drive gears, and gauges and clocks. At the entry gallery is Fertility Sculpture, using metal from the old Studebaker plant in the abstract, colorful and intricate design. Recently mentioned in a June 16 column by the Detroit News’ Neil Rubin, Burke and his family visited northern Michigan when they came to install his work at the Art Park. They were overwhelmed by its beauty, particularly on their scenic drive along M22 with its Lake Michigan vistas.

Both John Merigian’s and Gary Kulak’s work are accessible through their simplicity. Merigian’s On the Way is a striking, 13 foot steel sculpture of a figure in motion and appears ready to walk into the Art Park. Merigian says, “the movement of the crossing sun through the day is an integral part of creating constantly changing shadows and linear components.” The subtle angles bring the figure to life with bends in the elbow and knee. Merigian grew up in Detroit and installed a 32 foot permanent piece in Grand Rapids’ Lacks Park in 2011 entitled, Be Still and Know IV.

Perhaps Merigian’s giant figure would fit in Gary Kulak’s oversized chairs, Crown Chakra: One Moment Can Last a Lifetime, and Blue Square Back. “This work is about structure and framing the environment. The strong influence of the furniture industry in Michigan continues to impact my work for more than 40 years,” says Kulak, who resides in Birmingham, MI. These massive and colorful chairs are inviting, symbolic and fun. Kulak also created Barn Chair, a permanent sculpture within the Art Park. He is currently the head of the Fine Arts Department at Cranbrook Schools in Bloomfield Hills, MI.

On display through spring of 2016, these additional sculptures bring variety and character to the Art Park. 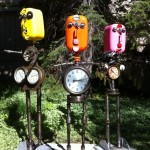 The Parcae by Tim Burke 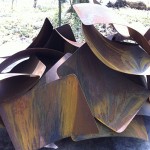 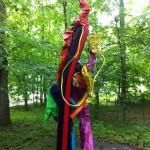 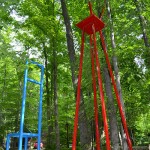 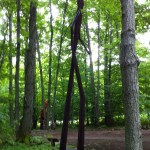 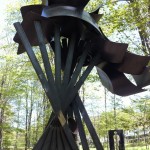