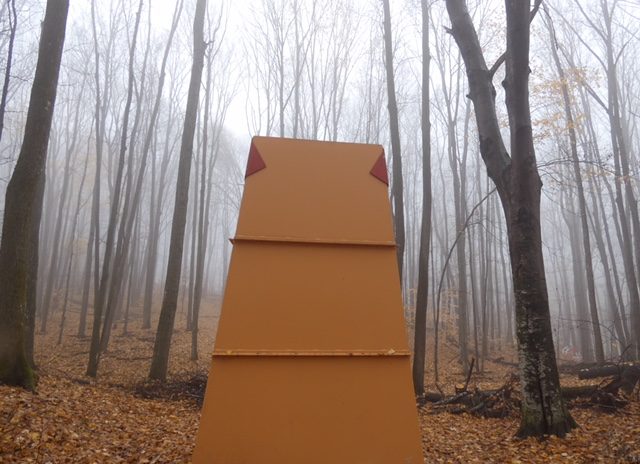 Michael Hall’s “Waltz Sculptures” were all fabricated in the 1980s. They are all made from three identical plates of metal cut, folded, and bolted together to form a four-sided container.  The idea of three panels configured into a four-sided sculpture gave Hall the title for his series since “¾ time” is synonymous with Waltz music. Hall states that his approach to creating three-dimensional form out of two-dimensional planes is not unlike the way seamstresses and tailors make dresses and suits from flat patterns.

Unlike dressmakers and tailors, however, Hall does not cut away and discard any of the material from his original panels. Instead, he simply folds and crimps each plate until it interlocks with its three companions in a fully sculptural figure. When complete, each Waltz is painted in two contrasting colors, one for the inside surface and the other for the outside—a process that further reveals the work’s abstract and tectonic essence.

For Hall, these works are intended to evoke familiar industrial and agricultural containers—hoppers, scoops, silos, cribs, dumpsters, blast furnaces, kilns and the like. “Waltz Stele” is intentionally both familiar and strange.  Viewers are invited to “see” this piece as an enigmatic but interactive part of the several environments in which it resides.

The waltz, born in Austria, was originally criticized on moral grounds because of its close holding. It gained in popularity with the growth of dance of venues in the 1930s such as the Greystone and Variety Ballrooms in Detroit and the dance competitions they sponsored.