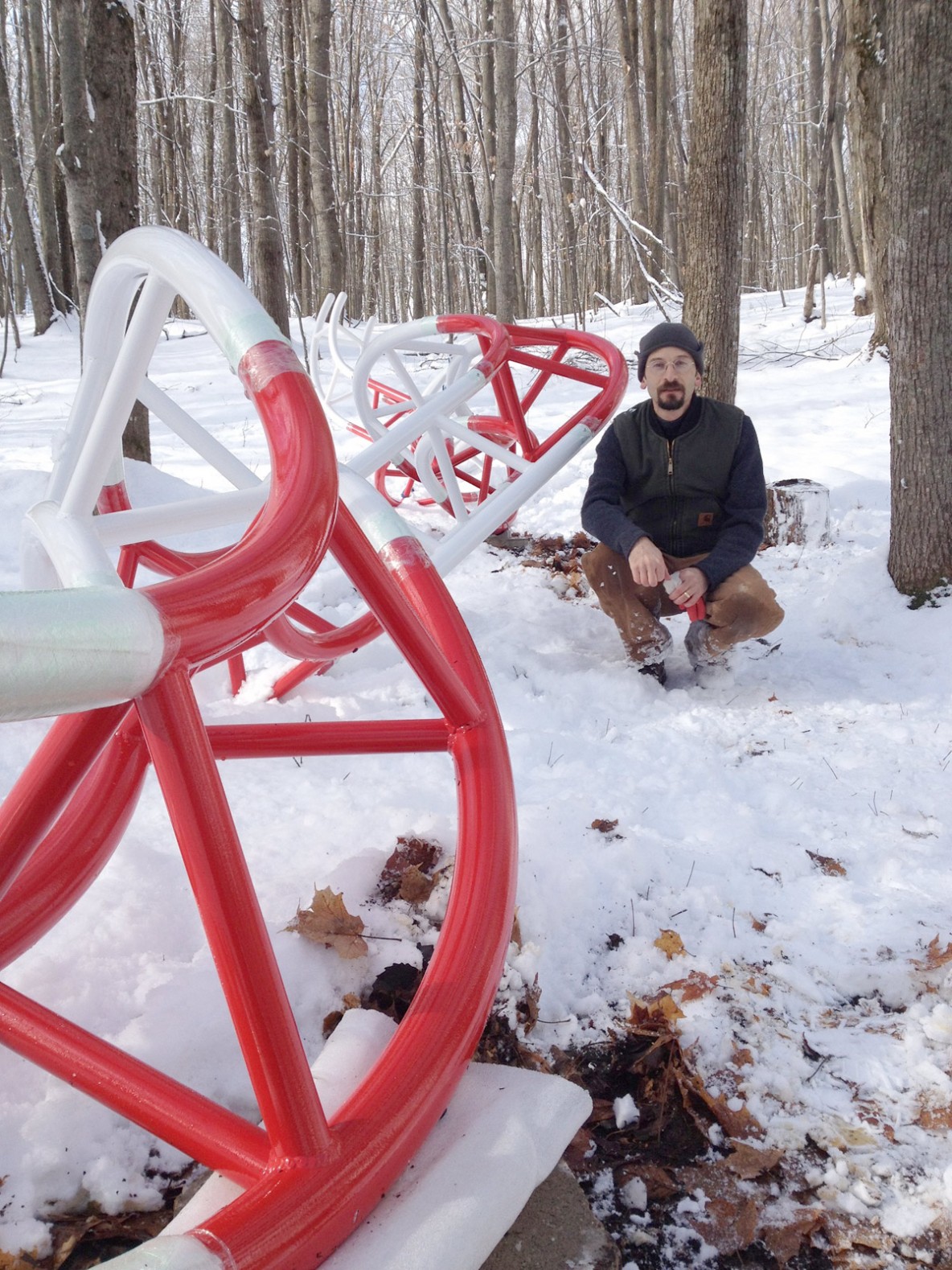 The newest sculpture at Michigan Legacy Art Park was installed November 12 – 14, 2014 by artist Eric Troffkin. Titled Communications Vine, the work will “grow” at the Art Park over the next six months after this initial installation. Back to install the second section of the sculpture, Eric Troffkin is working in the Art Park May 27 – 30, 2015. He will return in July 2015 to install the final 12 sections of the sculpture. Stay tuned! Scroll down to read his blog posts and view the slide show of the installation process.

I learn something new every time I install a sculpture. This is especially the case with the “Communications Vine.” It is intended to change and respond to the landscape, so it is never installed the same way twice. We have been talking about this project for almost two years, and today we got started with the first set of modular sections that will stay permanently at the Michigan Legacy Art Park. Over the next 6 months I will be making multiple trips to the Legacy Park to continue to add to the sculpture. It will grow in length, and it will sprout shapes that I have been calling mushrooms, but which are based on the shapes you see on real communications towers.

We are in a bit of a cold snap, but not so bad yet. A very little bit of snow on the ground, much better than rain. This was a really good day. We settled on a site about two weeks ago, so this morning I spent some time looking over the site and cutting down some small trees and pulling fallen branches away before starting to assemble the vine sections. It takes me some time, especially at the start of an installation, to begin to figure out how the work will fit into the landscape. This project is more like a puzzle than anything else. The vine sections only want to go together in particular ways. There is some flexibility to how the parts will go together, but the possibilities are constrained by the nature of the modules (90 degree bends that can be connected together at 3 orientations). It’s going to grow the way it wants to, not according to my whim. So, installation is engaging — trying to figure out what the vine will want to do next.

The multiple stages of installation are like a performance of growth over time. I am very interested working this way — I think it adds a layer of content to the work that would not be there otherwise. It’s one thing to make an object that has the look of organic growth, it’s something else to be able to show that work incrementally, so that with repeated visits, a viewer will actually see “growth.” This project has been exhibited twice already — first in Key West, FL and this past summer in Indianapolis. With each installation, it has doubled in length. These previous installations add layers of content — thee vine has sprouted in other places. But the project was devised for the Legacy Park and it’s wooded environment. It’s great to see it growing in it’s native soil. 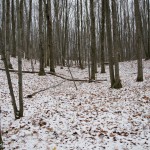 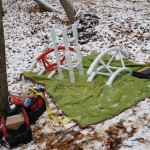 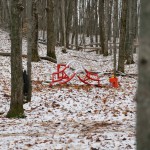 Working with the landscape. 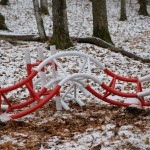 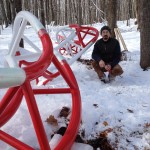 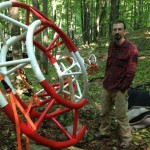 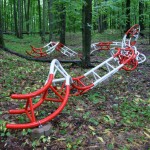 Day two of installation felt like a race with the weather. It snowed a bit more today, off and on the whole day, but in the end not very much accumulation. The heaviest snow probably fell as I was returning the UHaul trailer mid day. All twelve sections of this first phase of the installation have been assembled and set in place. Thanks to Dewey Blocksma for today’s help, especially this afternoon, figuring out the puzzle pieces. This installation in the woods is on much more uneven ground than the previous two installations, which actually makes installation easier and more entertaining. I finished up just as it was getting dark so, no photographs right now. I will photograph first thing tomorrow.

The next steps are sealing the joints between sections and touch-up painting. There are a few other details like this that will add up. There are no more big parts to move around, but I expect to be at work for most of the day tomorrow as well.

The project will be growing again as soon as the weather permits in the spring — right now, it has reached only one third its final length. That’s a good thought — it’s interesting now, and its going to keep going.

The third day of installation started out with more snow coming down, quite hard at times. I was able to drive up near the site at the very start of the day, but left my truck down in the parking lot for the rest of the day. Luckily my daughter Seely brought a sled along for her visit and she let me use it to haul some supplies.

On the second day, we were able to put all the elements together, so for the third, I put some concrete block footings in place and began sealing joints. These are the less dramatic tasks, and always more time consuming than it would seem. So, I was rushing to finish as it was getting dark. Today will be my last day — just a half day for some touch-up and to get some more photographs. A little bit of snow today might actually help to neaten up ground around the vine where we have been walking and doing some digging, which would help get a better photograph.

Taking pictures of sculpture is an important part of the process. Over the course of the time we have been discussing this project, a site which would produce an interesting image has been something we’ve talked about. I think the site we found will work well for this over the long term. There are trees for the vine to wine its way around, but enough open space so it will always be visible in its entirety from several points of view.

I went back on Saturday to continue working — mostly touching up the joints where sections of the sculpture are connected, but also to try and get a few more photographs. I ended up spending most of the day at this, finally getting the remaining equipment packed away and on the road back to Detroit at 4:00. It sounds like I made it just in time to leave before the snow. I am not sure how much more fell in the park, but the last day definitely felt cooler than the three before.

I am eager to get back to the park as early in the spring as possible. This was a great initial installation for the vine project.

I’ve been back at the Legacy Park for the second installation of the “Communications Vine” for the past two days — 2/3rds of the project is now assembled, with some touch-up painting left to go for this round. I will return for the final installation in about a month, and the Vine will reach its full length, consisting of 36 modular elements.

There are now 60 modular sections in total. Over the winter I installed shorter versions of the Vine in Nacogdoches, TX at Stephen F. Austin State University, for a two year group show, and an indoor version of the project for a two-person show at Manifest Gallery in Cincinnati. In about two weeks, I will bring 12 sections to Worcester, MA for a 6 month group show. The Vine is sprouting in multiple locations at the same time.

When the vine travels to temporary shows, I plan the installation, and usually have flat ground to put it on. Out here at the Legacy Park, where the ground is never flat, installation is always an improvisation, and I think it looks best here. This is where I get to try new things — this time the Vine makes a complete loop! And it has been great to do this installation in the wonderful weather.

“Yesterday, I finished installing a version of the Communications Vine for “Art in the Park” at Elm Park in Worcester, MA. The project will be here until October. I’ve been told that Elm Park is the oldest public park in the country and designed by pioneering landscape architect Frederick Law Olmsted. It’s great to have the vine here in an urban park. Over the three days of installation, I was able to see how much Elm Park is used by Worcester residents — the park always seems to have people in it. There will be an opening reception tomorrow (Sunday, June 14th, 3:00 – 7:00) with tours of the work in this group show. While here, I was also invited to speak to a small gathering of the show’s supporters, which gave me the chance to talk about the project and about the Michigan Legacy Art Park. Looking forward to heading back to MI soon and finishing the largest growth of the Vine out at the Legacy Park.”

Home Blog The Growth of a Vine