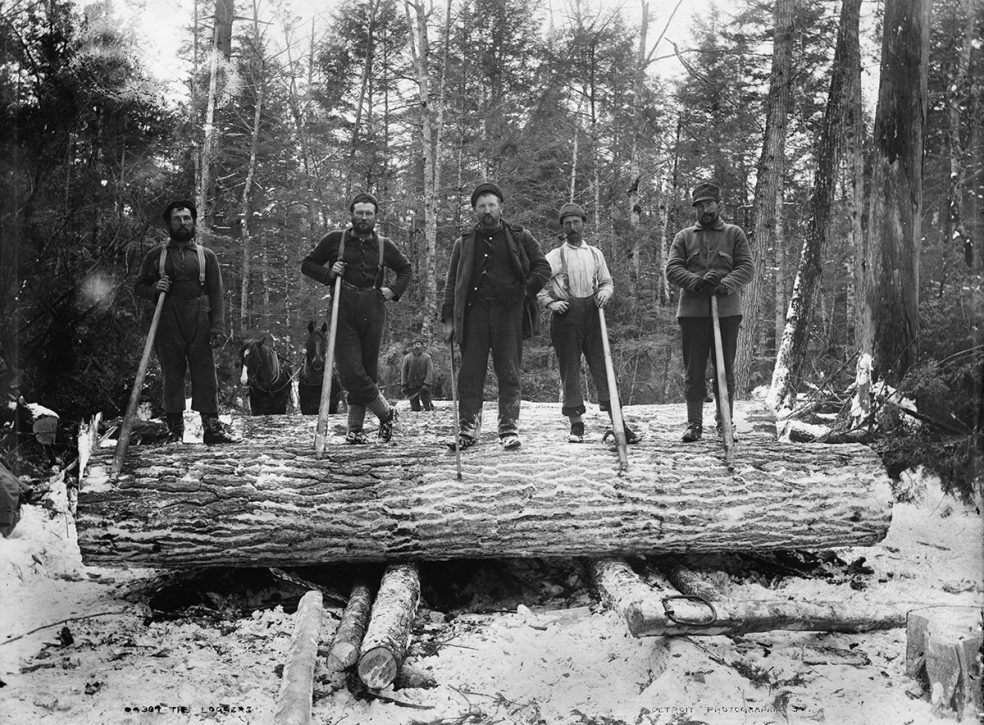 David Barr’s Sawpath Series is an exploration of the spiral pattern (a common theme in his work) that occurs often in nature—including in cones from the types of pines harvested in Michigan’s logging era. This series of sculptures connects the essence of those trees and their ecosystems to the relationship humans have with their environment. When looking beyond the artist’s precise calculations in the position and angle of every element, one can imagine the stories wrapped up in sawblades cutting through forests of monstrous pines to be stacked, hauled, and shipped for the sake of industry and the Midwest’s growing population.

For 20 years lumbermen flocked to Michigan—young men looking for a job, Scandinavians, French Canadians, Irish immigrants—to fill the austere lumbering camps, earn a day’s wage, and cut down the many pines (white pine, jack pines, and Norway pines) of our part of Michigan. That lumber provided homes for people in Chicago and for the settlers of the central plains. Many of the trees were over two hundred years old, over two hundred feet high, and five feet in diameter.

These young men, mostly in their twenties, were known for their prodigious strength. They worked from dawn through dusk, six days a week cutting, hauling, and piling logs. They received a monthly pay of $20-26 per month plus room and board. Since it was easier to transport logs to a river over ice covered roads, the crews worked in the winter. Quite frequently local farmers would work in the logging camps in winter to get more hard cash for their farms. Each camp had about seventy men, twenty teams of horses, and seven yoke of oxen. 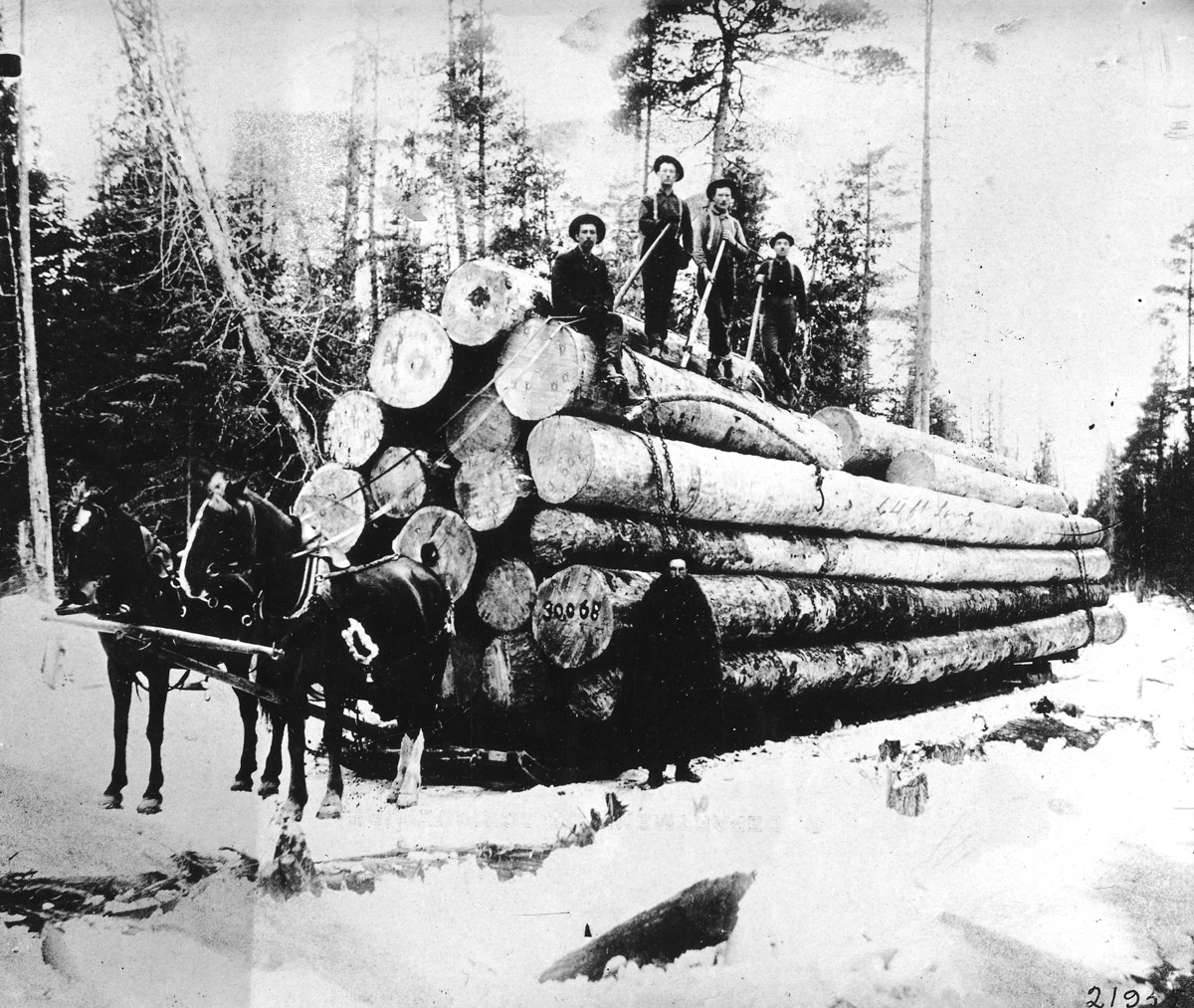 White Pine Logs on a Sled

Men called timber cruisers, who worked for the lumbering companies, identified a piece of forest to be cut, then the lumbering camp was pulled together. For a restful sleep, an uninsulated bunk house was built of lumber, with a wood burning stove at one end, and fifteen or more wooden bunks. One can imagine the frosty nights in these bunkhouses, filled with the sounds of snoring men and the aroma of “sweet-smelling” socks hung above the stove to dry.

Cooks labored in the cook shanty from before four o’clock in the morning peeling potatoes, making pancakes for breakfast, then peeling potatoes again, making bread, cooking beans and pork to be taken to the men for lunch and to be served for dinner with some apple or vinegar pie.
Horses and oxen were needed for their strength pulling logs so a blacksmith shop, a barn, a granary took good care for the animals.

Swampers: cleared the road to the river from where lumber was cut
Wood Butcher: carpenter
Skidding Sled: a travois to carry logs to the skidway
Sawyer: those who turned the great trunks of trees into sawlogs
Teamsters: hooked tongs to cut logs and dragged them on a travois to the loading spot
Fallers: those who called “Timberrrrrrrrrrrrrrrrrrrrrrr!” and fell the trees
Scaler: recorded the board feet on each log and marked the log mark
Riverhogs: the best of the lumbermen who followed the logs down the river

Logs were cut in the winter, transported on ice roads to local rivers—the Manistee, The Betsie, The Platt River, Otter Creek—then when the spring melted the river ice, the logs were pushed into the river to float downstream. The logs then floated from where they were cut to mills at Lake Michigan. “Suddenly with a heavy rumble, the pile of logs sank, the lower logs ‘mushing out’ toward the water.”1 It was a grand spectacle!

The best of the lumberjacks worked on the rivers in the spring, to keep the logs from jamming up, depending upon their catlike ability to leap from log to log. A jam crew, the pick of the river men, followed the first of the logs down the icy river, to identify possible pile-ups and to keep space between the logs. A wanigan, the cooks’ boat, followed the logs down the river. The cooks would run their lunches to the rivermen who would work and eat at the same time. As the men followed the logs downstream, they would wrap up in a blanket to sleep at night in the spring-wet forest. The peavey was the rivermen’s tool that was used for balance and to push logs apart.

After crushing and rolling down the river, acres of logs arrived at the site of the mill on Lake Michigan, where they were separated by the head gap sorter, who knew all the log marks of the different companies. 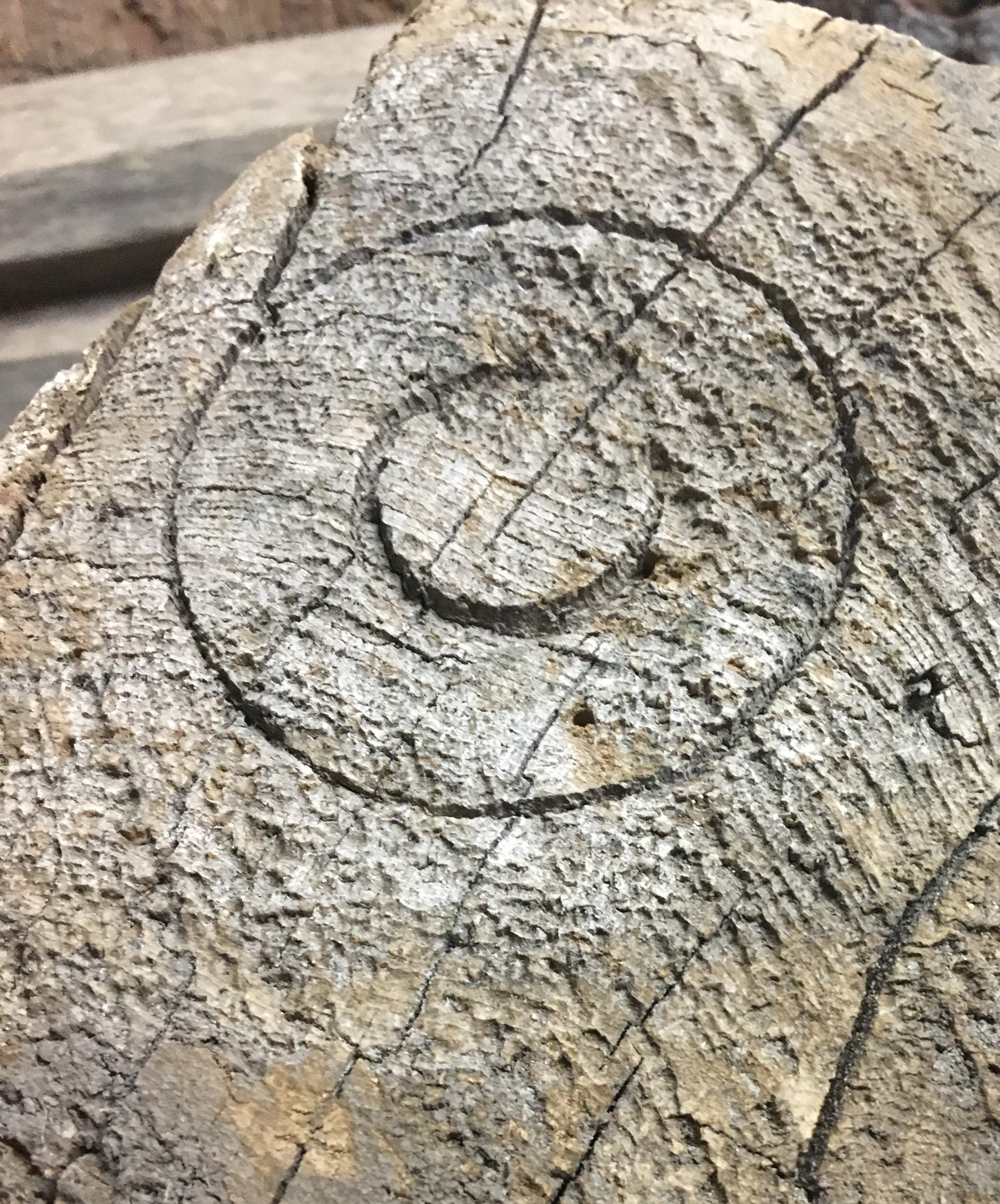 Log marked ”C” for Cranes, a company in south Frankfort, from about 1895.

Log marks were registered in each county according to laws established in the Michigan legislature. The men who worked in the logging camps and on the rivers were a gregarious lot, who teased, and made up songs and crafted stories of Paul Bunyan. The design of log marks were another creative outlet for the men, an art using mainly line in patterns – straight lines, initials, triangles, squares or combinations of them. The mark above (on display at Benzie Area Historical Museum) is a “C” for Cranes, a company in south Frankfort, from about 1895. 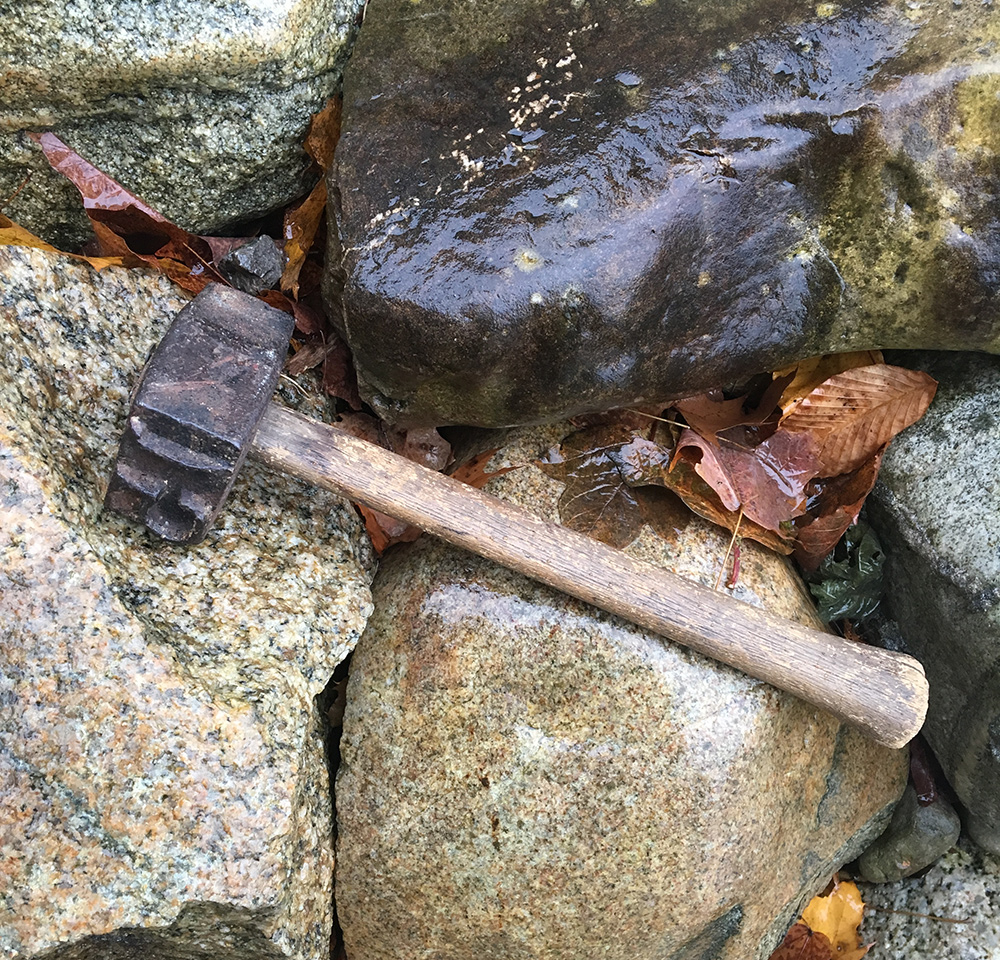 Today we might call this a trademark, a logo, or a brand. If you had to invent a log mark for yourself, using the design concept of line, what would it be?

Dr. Misty Sheehan is Director of the Benzie Area Historical Museum, where you can see artifacts from the region’s history like these log marking tools and examples. For more information visit their website.