The crowd raised their glasses to toast 20 years of the park – its founders, board members, volunteers and patrons.

A celebratory affair and the park’s annual fundraiser, the 2015 Legacy Gala recognized the first 20 years of Michigan Legacy Art Park (MLAP) and raised the most funds yet.

Held at Crystal Mountain on Friday, Aug. 21, the gala brought together the Art Park’s founding members, including Jim and Chris MacInnes, CEO and COO of Crystal Mountain. The other founders present were: Paul Duffy; Gene Jenneman, director of the Dennos Museum; David Mix; David Petritz on behalf of his mother, Althea; and Jim Ristine.

Art Park board members joined with artists and patrons for an evening of silent and live auctions, a champagne toast and music by local musician David Chown. The locally-sourced dinner was prepared by Chef Bryant Betts and the culinary team at Crystal Mountain.

Artists with work in the 30-acre sculpture park who were in attendance included William Allen, Dewey Blocksma, Sergio DeGiusti, David Pertrakovitz, and Eric Troffkin, whose piece, Communications Vine, is the park’s latest sculpture acquisition. The keynote speaker of the evening was the director of Michigan Council for Arts and Cultural Affairs (MCACA), John Bracey. 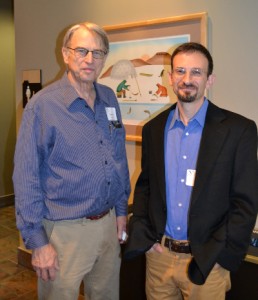 The event raised over $46,000 for MLAP of which approximately $23,000 will be applied toward the park’s Art Access for All Capital, which is nearing the $500,000 goal. The campaign has allowed for several additions and improvements to the park, including a new accessible trail, a rebuilt amphitheater and six new benches in the park for rest and contemplation. A portion of the money raised at the Legacy Gala will also go toward funding a new position for the park, the David Barr Endowed Chair for Artistic Direction, in honor of MLAP founder and artist David Barr.