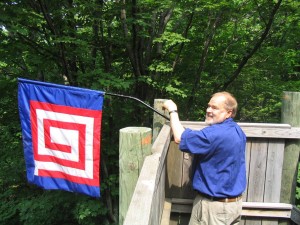 David Barr hanging the flag at Stockade Labyrinth. Click to watch the video about David’s Legacy. Photo by: David Williams.

The man who brought his expansive artistic vision to northern Michigan and founded Michigan Legacy Art Park passed away peacefully Aug. 28 at the age of 75. Described as dedicated, generous, and giving of his own knowledge, David Barr was an associate professor of sculpture at Macomb Community College in Warren, Michigan for forty years. He has eight sculptures within the 30-acre art park, located at Crystal Mountain.

“We are all so very sad to have lost David today,” said Renee Hintz, MLAP’s executive director. “He was such a compassionate friend and a great mind – a giant in the art world. He created a body of work – sculptures, reliefs, books and the Art Park – from which great lessons about humanity can be learned.” 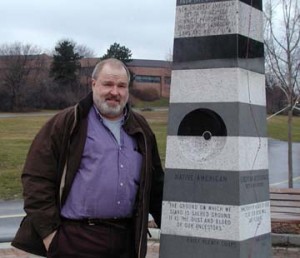 David Barr next to one of the obelisks within his Coasting the Baseline series.

Internationally acclaimed, Barr was awarded the Governor’s Michigan Artist Award in 1988, telling of his dream to create a place which told Michigan’s history through art. Barr worked tirelessly to create MLAP, aspiring to give artists the opportunity to express Michigan’s story through, “fundamental materials of nature.” Barr’s dream became a reality with the opening of Michigan Legacy Art Park in 1995. The Art Park celebrates 20 years in September.

Barr believed in using common “laborer” materials to make art democratic – understood in a common language. Many of his sculptures are geometric in nature and made of wood, stone or steel. A prolific artist, one of his most visible works is the gleaming arch, Transcending, in downtown Detroit, a tribute to the laborers who built Michigan and the country. Knowing no boundaries for his vision and aspirations, Barr worked on the Four Corners Project – perhaps the largest sculpture in the world. It aimed to connect people, cross boundaries and show the smallness of the earth by connecting points of the earth’s tetrahedron.

MLAP founding board member and close friend, Marilyn Wheaton, says, “David Barr’s curiosity, intellect, creativity, and passion for the art are distinguishable from all others. Creative experience was David’s mantra. In his 2008 Crossing Lines manuscript, he wrote, ‘For nearly fifty years, I have been a creative worker,’ and he referred to his famous Four Corners Project—1976-1985—as ‘an act of constructive creation.’  He often referred to the unifying principles of art while installing his series of global art projects. David understood with absolute clarity the power of art, and he articulated that knowledge with passion and conviction,” Wheaton said.

“He put his whole life into creating his work, and it shows,” says Ristine.

Barr received a Master’s of Fine Arts degree from Wayne State University. He was preceeded in death by his beloved wife and artistic collaborator, Beth Dwaihy-Barr, in December of 2013. Earlier that year, Barr and his wife were honored with MLAP’s Legacy Award at the park’s 2013 Legacy Gala. A tribute video was made about the Barrs and can be viewed here. 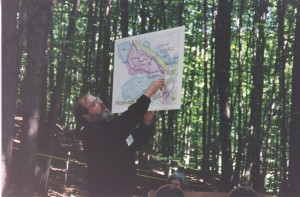 This archival photo shows Barr holding up original plans for his dream – a “Michigan art park.”

We will be forever grateful for David, his legacy, vision and the enduring gift he gave us all – Michigan Legacy Art Park.

For more into David Barr’s impact on those around, you can read thoughts in memory of David from family and friends.