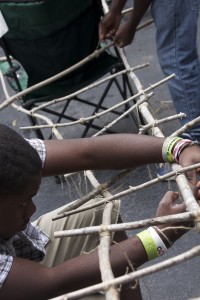 In the summer of 2012, I embarked on a collaborative adventure with Blue Sky Project in Dayton, Ohio. Having been a resident artist the previous summer, I was looking to expand on the collaborative experience in which I had engaged. With Michigan Legacy Art Park on my radar, and the experience of working within a five senses learning curriculum at the Leelanau School, I set out to craft a program that would allow me to bring a group of teens from the City of Dayton,
immerse them in a new environment, and provide them with new experience from which we would craft a collaborative, creative project.

The challenge of stewarding collaboration is to enter the experience with no set plans, no preconceptions, an open mind, and a plan to be flexible. Having been through the program the previous year, I really understood the value of having others be significantly involved in the process of developing work and creating an artistic product. For an artist, this is usually a solitary activity and we typically only receive input at a stage when we are ready to open the work up to criticism. Inviting outsiders–teens no less…and a bunch of them–into my process was akin to letting strangers into my head. This arrangement really made me scrutinize the way I approach my artistic practice but the collaboration opened me up to many more possibilities and propelled
me to create work that I would not have been able to make otherwise. For 2012, I was looking for
more of same. 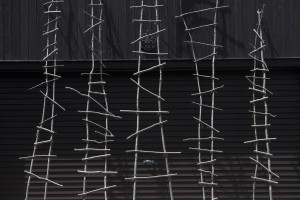 The whole process began with me picking up a group of teens from Dayton. We loaded into a van and headed off for northwest Michigan. This particular group of teens were Blue Sky Project
alums so I was comfortable in the fact that I knew them all personally and had worked with a couple of them previously. I was nervous about how the group would embrace the environment I was about to expose them to, and I was anxious about the kind of work we would create together. We arrived shortly after sunset and headed straight to the beach. Watching the kids kick off their shoes and test the waters Lake Michigan with their feet was a sign that we were going to have a great week.

The group spent the first couple of days exploring Sleeping Bear Dunes, learning about the history of the area, 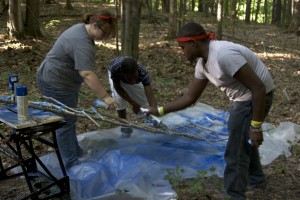 experimenting with photos and video, and discussing all of the possibilities of our collaborative efforts. We hiked, went sailing, star-gazed, kayaked, and criss-crossed the Sleeping Bear Dunes area as we began to formulate a collective idea about what we wanted to do. We were definitely inspired as we shared pictures, sketches, and details about the various things we had seen during each day. As we shared our ideas a focus began to emerge and the theme of migration started to move to the center of our collaboration.

Our preparations for Michigan Legacy Art Park started from a migration story we had heard and some of the photos and diagrams we had seen. We embraced the form of a ladder as a symbol we could use to talk about the idea of migration. The forms were interesting, the meanings and references were many, and we could build our own ladders from natural materials we collected from the area. Once we decided on the form, we set out to construct a series of ladders that could be installed in the Art Park. The forms were finalized and finished in reaction to the space we had picked out in the park and then we spent several days finishing and installing the work. 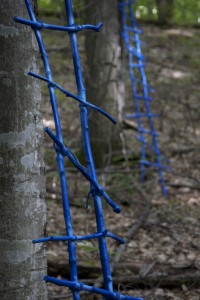 The most amazing part of the collaborative process is that everyone gets to walk away with a genuine experience that is influenced by everyone in the group. As we all stood in the Art Park, looking at the finished piece, documenting our work, and discussing the entire creative process, we had a great sense of satisfaction in the fact that we had worked together so seamlessly. We equated our journey through the process with the ladders we had created, where every we took each step together while all moving forward individually. My hope for the teenagers was that they would have an experience that would perhaps change their lives. In contrast to the urban environment they were used to, Sleeping Bear Dunes and Michigan Legacy Art Park gave them the opportunity to experience nature and art in a very unique way and, I hope for all of us, it will be an experience that none of us will forget.